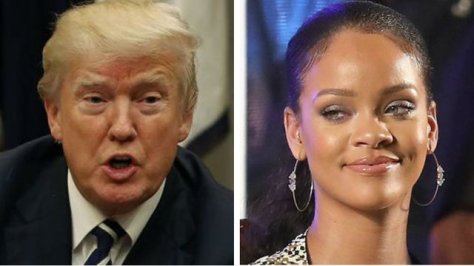 Pop star Rihanna won a legal victory over President Trump this week after her performing rights company Broadcast Music Inc., (BMI) informed the Trump campaign that it can no longer use her music at events.

“BMI has received a communication from Robyn Fenty, professionally known as ‘Rihanna,’ objecting to the Trump Campaign’s use of Rihanna’s musical works,” BMI said in a Nov. 6 letter obtained by the Times.

The letter, addressed to senior members of Trump’s campaign, comes days after the singer vowed that her songs would no longer be played at Trump’s “tragic rallies.”

Rihanna first became aware that her hit song “Don’t Stop the Music” was playing before a Trump rally in Tallahassee, Fla., last week.

Washington Post correspondent Philip Rucker tweeted that Rihanna’s song was “blaring” in the stadium and that Trump aides were tossing free T-shirts into the crowd like they were at a baseball game.

“Not for much longer,” Rihanna responded on Twitter. “Me nor my people would ever be at or around one of those tragic rallies.”

When the same song was played again during another rally in Chattanooga, Tenn., her legal team sent Trump an official cease-and-desist letter.

“As you are or should be aware, Ms. Fenty has not provided her consent to Mr. Trump to use her music. Such use is therefore improper,” the letter obtained by Rolling Stone read.

Rihanna is an outspoken Democratic supporter who endorsed Andrew Gillum ahead of Florida’s contentious gubernatorial race.

She’s not the first musician who has fought back against Trump for using their songs during his political rallies.

Pharrell Williams reportedly sent Trump a cease-and-desist warning after his song “Happy” was played at a rally just hours after the Pittsburgh synagogue shooting.

Guns N’ Roses frontman Axl Rose called out the president for playing their music even after the band formally requested that he stop.

“Unfortunately the Trump campaign is using loopholes in the various venues’ blanket performance licenses which were not intended for such craven political purposes, without the songwriters’ consent,” Rose wrote on Twitter. “Can u say ‘shitbags?!’”

Independent music publisher ole has reached a deal with SB21 Music Publishing to acquire 50% ownership of its music catalog.

The Canadian publisher will also control all songwriter contracts and administration rights to the full catalog, according to details shared ahead of the weekend. SB21’s music catalog includes hits from Luke Bryan, Danny Gokey, Jason Aldean, and Jordan Davis.

The SB21 catalog in question contains more than 2,500 songs.

Ole’s Vice President of Creative John Ozier and SB21 founder owner and founder Teresa Smith both heralded the deal as a way to spur greater growth in placements and resulting revenue. “The writers and partners of SB21 are very proud and excited to be working with ole in taking the SB21 songs to places where the music will be given the opportunity to speak for itself,” Smith stated.

“We are honored to be joining ole’s distinguished roster, and cannot wait to see the incredible things that the future will bring for this catalog.”

SB21 was founded in 2011 by songwriter and producer Steve Pasch. The company’s catalog of songs includes works from songwriters like Brian White who wrote Rodney Adkins’ “Watching You,” and David Fraiser who wrote Luke Bryan’s recent hit “Most People Are Good.”

Ole is a Canadian independent music rights management firm that was founded in 2004. The company has offices in Toronto, Nashville, New York, Los Angeles, and London. Ole’s umbrella of works contains more than 55,000 songs, and it operates a label services arm under the ole label group.

The acquisition not all that surprising, despite the fact that ole was looking for a new equity sponsor in 2017. Ole sought an overall valuation of $800 million during that recapitalization process. During the process, the company confirmed that it would include “seeking acquisitions that make strategic sense.”

Now that the recapitalization process has been completed, SB21 could be the first of many indie publisher acquisitions and deals.

Talking Up Music Education is a podcast from The NAMM Foundation about music education. Recorded live from 2018 Summer NAMM, episode 57 includes an interview with American folklore scholar and former Chairman of the National Endowment for the Arts Bill Ivey.

“Music education needs to make its point as loudly as possible, because there are a lot of pressures out there that’s saying technology can substitute for everything,” said Ivey. “If everything of meaning can be found on a screen, I know that’s not true, but there are a lot of forces lined up that want us to believe that.”

During the podcast, Ivey explores ideas for how to achieve meaning and purpose in life through art and music as American society moves away from work and wealth as a means to fulfillment.

Listen to the podcast

At the 2018 Tribeca Film Festival, IBM experts discussed ways filmmakers can use blockchain technology to protect their work, collaborate, and be fairly compensated.

They are still in Beta roll out so we are not sure of timing when it comes to being able to utilize the services.

We will definitely keep you posted though.

The new office, expected to open in early 2019, will allow BMI to work directly with the talented songwriters, composers, publishers and emerging songwriters and artists in the thriving Austin music community and help enhance their ability to earn a living by writing music. The BMI office is being opened with the support of Governor Abbott and the Texas Music Office and Entrepreneur Gary Keller, co-founder of the Austin Music Movement, who is signing on as a key sponsor of BMI’s Texas music initiatives.

“Today we are proud to announce that BMI’s support of Texas songwriters, composers and music publishers will become even more Texas-focused,” said Governor Abbott. “This capital investment expansion represents a real commitment to continue Texas’ rise as a music industry business center. I thank the Texas Music Office for their work in making this expansion possible and look forward to working with BMI to grow our thriving music industry.”

Mike O’Neill, President and CEO of BMI, added, “BMI has been active in the Texas music community for decades, and as their creative community has grown, we’ve grown along with them. Having a permanent presence in Austin is the next logical step, and we look forward to building on our many relationships within the industry to help give Texas songwriters all the support they need to create their greatest music. We’re thrilled to call Austin our newest home.”

Temporary office space has been identified and BMI is aiming to open its permanent office in either the Business District or South Congress area by March of 2019, to coincide with the 33rd annual edition of SXSW. BMI is actively conducting a search for the Creative executive to lead this office; the Austin team will report to BMI Vice President, Creative, Jody Williams, and BMI Assistant Vice President, Creative, Mason Hunter, who are both based in Nashville.

“BMI has a long track record of music industry community building in cities such as Nashville and Atlanta, and we look forward to working with them as they continue their work here in Texas,” said Texas Music Office Director Brendon Anthony. “BMI’s move to Austin represents a significant investment towards supporting Texas songwriters and their compositions. We are proud to welcome BMI and will work alongside them to increase opportunities for Texas musicians in the years to come.”

“The new BMI office adds to the incredible momentum we’re seeing behind the growing Austin Music Movement,” added Gary Keller. “Austin is the Live Music Capital of the World and having a company like BMI with the support of Governor Abbott establishes a presence in our city that helps further our efforts to support local music and provide resources to the many great musicians who call Austin home.”

BMI has played a major role in the development of Texas artists and writers who have gone on to great heights in the music industry, such as Robert Earl Keen, Willie Nelson, Waylon Jennings, Ray Benson, Bruce Robison, Joe Ely and Gary Clark Jr. Through its collection and distribution of public performance royalties, as well as its support of signature events like SXSW and the Austin City Limits Music Festival, BMI has been a steadfast supporter of the growth of the Texas music economy. The Austin office is the newest location for BMI, which currently has offices in New York, Los Angeles, Nashville, Atlanta, London, Puerto Rico and Washington D.C.

We’re currently building our discord channel to help guide aspiring and indie musicians through the wacky maze of music publishing and licensing.

The channel is just getting started so we’re asking for those interested (artists & professionals) to sign up and help begin the discussion at https://discord.gg/FDT6yy8

My friends trying to deal with my life choices #babyyoda #starwars #mandalorian #life #choices #ridewithme #outofcontrol
2 minutes of #tranquility. Enjoy your #flight. #meditation #stillness #eagle #aviation #ocean
#twerking #grandma #BlackNote
Just one of those nights... #modelo #austin #6thstreet #DWBs and #CPBs only. 💯
Stick with me... #music is #life it #heals the #soul and touches the #mind. #scapegoatslife #gmediamusic. Understand that we are on a #journey for #enlightenment whether you see it or not. Be there, be #aware.
Make sure to follow our good friends @scapegoatslife! The #brand for those who accept the #blame.
#clothed is the #newnaked join the scapegoats at www.kbicog.com
Original post by @malikpoet3
You cant help but notice... #scapegoats rider by #kbicog. www.kbicog.com #gmediawork #dobettertomorrow
#kbicoriginal #scapegoats #rider. Available at www.kbicog.com #cjmediawork #kbicog @kbic_og #scapegoatjones #harleydavidson #maui
#scapegoatjones logo design #cjmediawork #cjmediaportfolio

Our Experience. Your Vision.